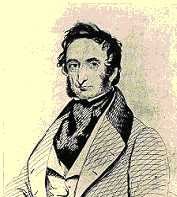 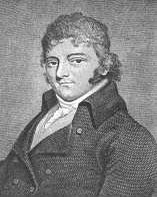 Immunogenic thyrotoxicosis is commonly referred to as Graves’ disease after the Irish physician Robert Graves. That however is a case of mistaken eponymous attribution to the wrong Celt, and the disorder should really be called Parry’s disease after the Welsh physician, Caleb Parry, who was the first to describe the clinical features.

Robert Graves was born in Dublin in 1797, the son of a clergyman. He graduated in Medicine from Dublin in 1818 and went on to become chief physician at Meath Hospital. In 1835 he published his lectures in which he described three patients with “a newly observed affectation of the thyroid gland in females”, noting palpitations, thyroid enlargement and exophthalmos. In fact, Graves incorrectly attributed the thyroid enlargement as a disorder secondary to overactivity of the heart. Robert Graves' career, as well as his family life, suffered a major downturn when he developed severe depression, probably due to primary hypothyroidism. He died in 1853.

The eponymous term Graves’ disease was first suggested by Trousseau in his Textbook of Medicine, and the name has stuck. However, another Celt, Caleb Parry, clearly described the disease before Robert Graves.

Caleb Parry was born in 1755, also the son of a clergyman. He graduated from Edinburgh University in 1788 and became a physician in Bath, and soon developed a reputation as an expert in disorders of the heart, including angina. John Hunter, who himself suffered from angina, was one of his patients. Parry first noted a case of “exophthalmic goitre” in his writings in 1786 but did not publish it at the time. He was also a renowned fossil collector and Founding Member of the Geological Society. His career ended however when he suffered a stroke in 1816, dying in 1822. His collected writings were published posthumously in 1825. In this he reports 5 cases with goitre, exophthalmos and cardiac arrhythmias. He correctly attributed the disorder as being primarily due to a disorder of the thyroid gland.

Sir William Osler, in his textbook published in 1898, ascribed the name “Parry’s Disease” to the disorder, however this was never accepted and the term “Graves’ disease entered popular usage. Interestingly, in continental Europe, the disorder is referred to as Basedow’s disease, although von Basedow (1799-1844) who graduated from Halle University in Germany, did not publish his report until 1840.