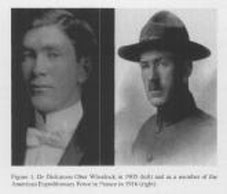 The first described operation for insulinoma was in an orthopaedic surgeon, Dr Dickinson Ober Wheelock. Wheelock was first seen at the Mayo Clinic in 1922 with “stomach trouble” and diagnosed as chronic cholecystitis. He had previously undergone a laparotomy and gastroenterostomy in 1918 for attacks of epigastric pain and ”shock”. He returned to the Mayo Clinic in 1926 with recurrent symptoms. His referral letter at the time from his GP, Dr McWhorter, stated that “he was at the Mayo Clinic earlier but did not receive any help and was quite dissatisfied. I think someone picked him for a ‘nut’ and he was sent home with advice to take a rest and the usual line of b.s. handed the ‘nuts’.” Dr McWhorter provided some family history. “Dr ES Muir of Winona, who died in 1919 was a cousin of Dr Wheelock and had the same symptoms. Dr. Muir’s wife stated that she could restore him to consciousness by giving him hot sweet coffee. Dr Muir died in coma following a maniacal attack after consultation by his doctors who decided that there was nothing wrong with him except nervousness. Wheelock is an exceptional case – try and get someone interested in him and don’t let him die because he sure will if he goes too long without carbohydrate.” Interestingly Wheelock also gave a history of having passed renal stones. His physicians realised that he needed up to 25 g glucose per hour to maintain an asymptomatic state and so he was referred for surgery which was undertaken by Will Mayo on December 4th 1926. At operation a malignant pancreatic tumour and liver metastasis were biopsied. Struck by the similarity of the attacks with insulin shock, his physician, Dr Russell Wilder, injected tumour extract into rabbits with intriguing results. Post-operatively Wheelock did poorly, dying of “no apparent reason than exhaustion”. Autopsy confirmed carcinoma of the pancreas with liver metastases but no mention was made about the presence of abnormal parathyroid glands, although this is not surprising as the first operation on the parathyroid glands at the Mayo Clinic would not occur for another 7 years. With hindsight, it more than likely that Wheelock had the MEN1 syndrome.