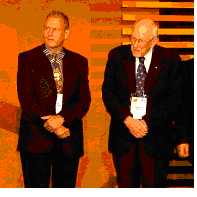 The IAES owes its origins to Peter Heimann, Professor of Surgery, Bergen, Norway. He was a general surgeon with a particular interest in the thyroid gland, and it was his ambition to polarize the activities of those general surgeons interested in the endocrine system into a special group within the Société Internationale de Chirurgie (SIC).

In 1978, Peter Heimann wrote to some of his friends that he was dying of gastric carcinoma, and stating his fervent wish that a group of endocrine surgeons should be formed. Scientific papers were invited and a single day program set up during the next meeting of the SIC together with the provision for all those interested to meet and discuss plans for the future.

At 9:00 a.m., Thursday, September 4, 1979, a group met in a room of the SIC congress in San Francisco and elected a president, Selwyn Taylor, a president-elect, Richard Egdahl, a secretary-treasurer, Orlo Clark, and a small international committee.

All those who had indicated that they would be present became the founding members and, since then, the membership has been strictly monitored by surgeons from the applicant's own country, as well as by the committee. The IAES currently counts more than 500 members from around the globe.

The meeting's first scientific session opened at 11.00 a.m. and so keen were other members of the congress to attend, that a larger hall had to be found to house the afternoon session. The standard of presentation and the subsequent discussion was of the highest order and it has remained so ever since. At the conclusion of the next meeting, which was held in Montreux, Switzerland, in 1981, the founding president, Selwyn Taylor, handed over to his successor a badge of office, placing it around his neck, and this ceremony has been carried on ever since at each meeting, the latest being in Adelaide in September this year where Leigh Delbridge received the badge of office. The subsequent list of IAES Presidents includes: Richard Egdahl (USA), Per-Ola Granberg (Sweden), Tom Reeve (Australia), Yoshide Fujimoto (Japan), Norman Thompson (USA), Hans Roher (Germany), Ivan Johnston (UK), Orlo Clark (USA), Charles Proye (France), Jon van Heerden (USA), Shiro Noguchi (Japan), Malcolm Wheeler (UK), Henning Dralle (Germany), and Goran Akerstrom (Sweden). It is heartening that the members' enthusiasm is maintained and even increased. The IAES owes much of the success of its early days to the beneficent sponsorship of the parent organization, the SIC.

The original aims of the IAES were to provide "a forum for the exchange of views of those who are involved in expanding the frontiers of endocrine surgery whether by clinical experience, laboratory investigation or in any other way, not for the general surgeon who occasionally operates on a thyroid or adrenal gland."

The IAES, indeed, fulfils these aims, and is proud of its place in the SIC. The recent IAES meeting in Adelaide demonstrated the valuable contribution by endocrine surgeons around the world. the next biennial meeting of the IAES will be held in Yokohama, Japan, in August 2010. Finally, the World Journal of Surgery regularly devotes a complete issue to the contributions of the IAES.

The IAES always presents a plenary session at the SIC congress, the Peter Heimann lecture, as a prestigious reminder of his contribution.