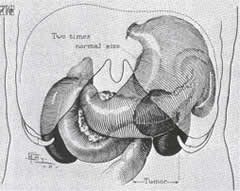 At the IAES Meeting in Durban in August, Jon van Heerden presented the story of Mother Joachim, the first successfully removed phaeochromocytoma in the US. Whilst a number of such tumours had been previously removed in Europe, the accurate recording and astute observations make a fascinating story.

Mother Joachim was a 30 yr old nun from Ontario, Canada, and was referred to the Mayo Clinic with a letter from Dr Duncan stating “I feel much as Festus felt in sending Paul to Rome – not having any definite accusation … she complains of weakness … and vomiting associated with severe headaches”. She was admitted to Saint Mary’s Hospital in June 1926. A description of her attacks was accurately recorded: “sudden onset pain in the back … and right side of neck associated with nausea and vomiting. Rapid heartbeat … Blood pressure 300/160 mm Hg. … Hands cool and sweaty”.

It was believed that her hypertension was mediated through the sympathetics and sympathectomy was considered. Because of the persistent lumbar pain, surgical exploration was performed by Dr Mayo on October 11, 1926. The operation lasted 64 minutes and it was noted that “exploration of the left adrenal showed it to be twice normal size … a rounded tumour apparently the size of a lemon was situated beneath the tail of the pancreas and enucleated intact. Considerable venous hemorrhage was controlled by pack”. The day after the operation Dr Mayo rep-orted that “her blood pressure immediately dropped and she feels much better this morning than she has for a long time” All this was done without any intravenous lines or therapy and without alpha blockade!

That she survived at all is attributed to practice of administering twice daily coffee enemas to post-surgical patients. Apart from some basal atelectasis her post-operative course was uneventful and she was discharged home on December 13, 1926. The procedure was reported in JAMA 1927;89:1047-50 with the accompanying operative diagram. In a letter to Dr Mayo dated February 28, 1927 Mother Joachim wrote “I am feeling wonderfully well and gaining weight each day. I have never had that terrible pain in my head again”. Mother Joachim eventually died in May 1944, 18 years after her operation. Notice of her death was received in a letter which reported “Mary Joachim’s operation was entirely successful … however she seems to have had a heart condition. Coronary thrombosis took her while she slept. She had taught her music pupils the previous day and was cheery and bright as usual”.