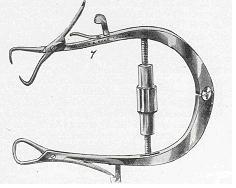 Thyroid surgeons from last century were at the forefront of developing surgical instruments to facilitate safe and effective thyroid surgery. Such instruments remain in widespread use in all forms of surgery today.

In this current era of sutureless thyroidectomy, where almost the entire procedure can be performed with a small, hand-held, disposable vessel sealing device, it is interesting to reflect on the role of thyroidectomy in the development of surgical instrumentation. Thyroidectomy has historically been considered the hallmark surgical procedure of general surgery. The ability to offer thyroid surgery with an acceptable mortality was the cornerstone upon which many of the major US surgical centres, such as the Mayo Clinic and the Lahey Clinic established their reputations. In order to achieve such high standards, many practitioners of thyroid surgery from last century developed  a range of novel instruments specifically designed to safely facilitate this particular procedure. For example Kocher, Crile, Lahey and Dunhill all developed artery forceps which remain in common use today for a whole range of surgical procedures, not just thyroidectomy. Cecil Joll was an English thyroid surgeon known for his meticulous attention to detail in the design of surgical instruments. He is best known for the Joll’s thyroid retractor. In his book he notes that “a self-retaining goitre retractor is highly important. The most generally useful type which I have developed is shown in the figure. It produces a satisfactory exposure for all classes of goitre and does not exhibit the irritating tendency to slip possessed by many retractors”.  Joll also designed artery forceps specifically for thyroid surgery. Joll’s comments on the importance of artery forceps, and the extraordinary number of these instruments he had available on the table, provide an interesting insight into the challenges, and volume of bleeding routinely faced by thyroid surgeons of that era. Joll states “it is worth while emphasizing the necessity for providing a very large number of efficient artery-forceps of good design. It is my custom to have six dozen pairs of these artery-forceps available for every goitre operation. They should be not less than 5½ inches in length and should have specially large finger loops in order to facilitate the rapid handling required. One extra assistant is deputed solely to hand to the surgeon and his chief assistant, without delay, these forceps as required.”