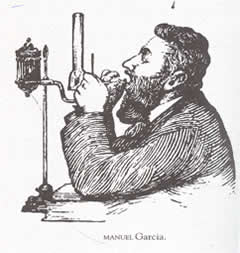 Routine laryngoscopy is part of the pre-operative assessment for patients undergoing thyroid or parathyroid surgery and is, as such, an integral component of endocrine surgical practice. Indirect laryngoscopy however was actually invented by an opera singer. The laryngoscope was invented by the Spanish singer Manuel Garcia in order to allow him to inspect his own vocal cords during singing practice. He recalled “I have often thought of using a mirror to observe the larynx from within while singing but had always considered it impossible. In September 1854, on a visit to Paris, I decided to see whether it could be done. I went to the famous instrument-maker Charriere, and asked if he had a thin mirror with a long shaft that could be used to inspect the throat. He had a small tooth mirror, sent to the London Exhibition in 1851 which nobody wanted. I bought it and took it to my sister’s, with another little pocket mirror, impatient to begin my experiment. I warmed the mirror in hot water, dried it carefully, and placed it against the tongue. When I cast in light with the pocket mirror against it, I saw the larynx wide open before me.” Manuel Garcia the younger (1805-1906) was in fact the son of his more famous father, Manuel de Populo Vicente Garcia (1775-1832), who premiered the role of Count Almaviva in the Barber of Seville. Manuel Garcia the younger was a famous voice teacher who trained Jenny Lind and Johanna Wagner as well as Mathilde Marchesi. He spent much of his time analysing the singing voice, and published a distinguished treatise on singing, Nouveau Traitz sur l'Art du Chant, in 1856. His two sisters were celebrated singers of their day: Maria Malibran (1808-1836) and Pauline Viardot (1821-1910).