March 2005 Newsletter: The mechanism of thyrotoxicosis 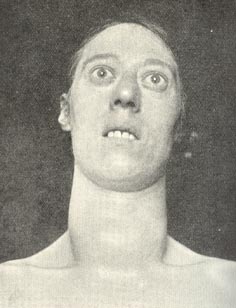 “Exopthalmic goitre” widely known as Graves’ Disease in the English-speaking world was actually first noted by Caleb Hiller Parry in 1786. It was not until 1825 however that his account of eight patients with “enlargement of the thyroid gland in connexion with palpitation of the heart” was published posthumously. In 1835 Robert Graves described three patients with “a newly observed affectation of the thyroid gland in females”, noting palpitations, thyroid enlargement and exophthalmos. Subsequently Basedow, in 1840, described three patients with“exophthalmos due to hypertrophy of cellular tissue in the orbit, goitre and palpitations” and the disorder bears his name in Europe. Graves ascribed the observed thyroid enlargement as being due to overaction of the heart. However a primary role for the thyroid itself was strongly suggested by the effects of surgical operations. In the nineteenth century patients were treated with setons, thyroid artery ligation, or partial thyroidectomy primarily to relieve local pressure effects, however the toxic features were sometimes also noted to be relieved. The significance of this was first appreciated by Ludwig Rehn, of Frankfurt-am-Main in 1884. He reported three cases of Basedow’s disease whose toxic symptoms were cured incidentally when their goitres were removed for relief of dyspnoea. It was he who proposed thyroid overactivity as the primary mechanism of the symptoms manifest in this disorder. Toxic symptoms also subsided after thyroid resection in one of Mikulicz’s patients. Paul Mobius of Leipzig made the same suggestion as Rehn two years later and in 1893 William Greenfield of Edinburgh described primary thyroid hyperplasia in patients with exophthalmic goitre. Berry, the famous English thyroid surgeon, suggested in 1901 that the thyroid secretion in toxic goitre was altered in quantity, although he also proposed that it might be altered in quality and attributed the disease to a specific “thyroid toxin”. It was up to Plummer, a physician from the Mayp Clinic, to demonstrate that excess thyroxine in itself caused all the features of hyperthyroidism excepting exphthalmos.