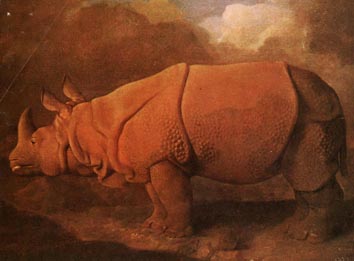 The Indian rhinoceros (Rhinoceros unicornis) is the international mascot of endocrine surgery. The story behind this relates to the discovery of the parathyroid glands. On 24th May 1834 the Zoological Society of London purchased its first Great Indian Rhinoceros, Rhinoceros unicornis; the commoner African Rhinoceros has two horns. It duly arrived at the Zoo and was a great attraction until it died 15 years later on 19th November 1849 with rib fractures following a fall. The Conservator of the Hunterian Museum of the Royal College of Surgeons at the time was Richard Owen and he was offered the carcass, upon which he subsequently performed a post-mortem. He read a paper about it to the Zoological Society of London and this was subsequently published in their Transactions. It is this paper that the first ever description of the parathyroid glands appears described as follows: “a small compact yellow glandular body was attached to the thyroid at the point where the veins emerge”. The parathyroids were, in fact, the last ever mammalian organ visible to the naked eye to be discovered. Their importance to endocrine surgeons worldwide has led to the Indian Rhinoceros becoming the international mascot of endocrine surgery.

From a presentation by Ian Gough to the RACS Annual Scientific Meeting, Adelaide, May 2002