July 2011 Newsletter: Rundle and His Curve 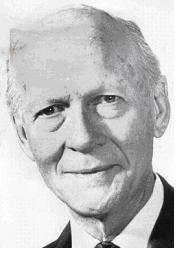 Rundle’s curve is a well known phenomenon, found in many ophthalmology and endocrinology textbooks. It describes the natural history of the orbital changes in Graves’ ophthalmopathy. Whilst all the primary research underlying this observation was undertaken in the London, Rundle was in fact an Australian, and later returned to Sydney to make a significant contribution to the surgical management of thyroid disease.

Francis Felix Rundle was born in Newcastle, NSW, on April 13th 1910. He grew up in that industrial city before studying medicine at the University of Sydney, where he graduated MBBS with 1st class honours in 1932. After graduation he moved to London to further his surgical career. He was subsequently appointed as Assistant Director of the Surgical Unit at St Bartholemew’s Hospital, and Research Associate at the London County Council Thyroid Clinic. His major interest was in Graves’ ophthalmopathy and he produced a series of research papers over the next decade describing the natural history of the orbital changes in Graves’ disease. His graph showing the initial worsening and then partial resolution of those changes became known as “Rundle’s Curve” and remains a fundamental part of endocrinology and ophthalmology teaching to this day. 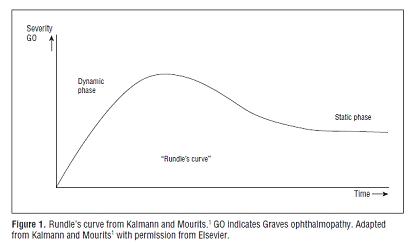 He was awarded the Jacksonian Prize of the Royal College of Surgeons for his essay on Graves’ ophthalmopathy, and was subsequently appointed Hunterian Professor. His academic career took a backseat to service with the British Army. Rundle then spent a year in the United States at Harvard, Johns Hopkins, and Stanford as the Rockefeller Travelling Fellow. He was so impressed with the role of clinical research that he sought to replicate this environment at future appointments. In 1950 Rundle moved to Sydney and established the Unit of Clinical Investigation at Royal North Shore Hospital. He enlisted to the Unit Dr Hal Oddie, a physicist from Oak Ridge Nuclear Facility USA, to study iodine dynamics and 131I use. With Oddie’s help he was able to set up the first group in Australia to direct management of dosage of 131I in thyrotoxicosis and non-toxic diffuse goitre. He also helped establish a facility at Royal North Shore for the management of thyroid cancer with 131I . His other major contribution to the management of thyroid disease whilst at Royal North Shore was the production, as editor, of the 2nd edition of Cecil Joll’s Textbook of Thyroid Surgery. In its time this book was the definitive reference text on thyroid disease and thyroid surgery. Notable in the 2nd edition was the change in the operative diagram, with a return to anatomical dissection, emphasising formal identification of the recurrent laryngeal nerve, an approach which had formerly been rejected by Cecil Joll. His other major contribution was to appoint to the Unit of Clinical Investigation in 1957, a young Thomas Reeve, recently returned from the USA. Rundle went on to take up a post as the founding Dean of the Faculty of Medicine at the University of NSW and subsequently Director of the Centre for Medical Education Research and Development.