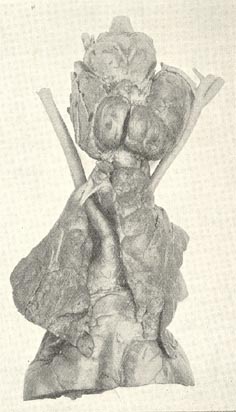 Cecil Joll devoted an entire chapter of his historic book to non resectional surgical treatment of thyrotoxicosis. The following are selected extracts.

Thymectomy: Markham (1858) was the first to note the co-existence of enlargement of the thymus and thyroid in exophthalmic goitre. Zesas (1910) advocated removal of the thymus to the exclusion of thyroidectomy. Von Harberer treated 35 cases in this way, with three deaths, two of which he attributed to incomplete removal of the thymus. However a powerful argument against thymectomy is that, in young patients, thymic enlargment is so great extending downwards over the pericardium that any attempt to remove it from above is certain to fail, and if thoracotomy were adopted the mortality would be appalling.

Cervical sympathectomy: It is argued that cutting off the sympathetic influence reduces the activity of the thyroid gland to such a degree that normal function is restored. It must also be valuable in curing exophthalmos if this is due to overaction of Muller’s and Landstrom’s muscles. Jaboulay was the first to operate for exophthalmic goitre by performing sympathectomy in 1896. Of 31 cases, 18 were re-examined four to fourteen years later and only three of these were classified as “cured”. T Kocher (1902) operated three times on the cervical sympathetic for thyrotoxicosis with one death, one success and one failure.

Intraglandular injections: Attempts have been made to destroy the thyroid by injection of boiling water, alcohol, quinine and carbolic acid. I adopted this in one case injecting boiling water directly into the gland. The patient wrote to me a year later to say she was completely cured. It must be admitted that injections into the thyroid gland are by no means free from risk: at least two sudden deaths have occurred with Porter’s method and the eventual results are certainly not so satisfactory as with other surgical procedures.

Ligation of Arteries: Blizard carried out the first ligation of the superior thyroid artery not later than 1811 but his patient died. As late as 1921, only 30 percent of the cases of exophthalmic goitre at the Mayo Clinic were submitted to primary thyroidectomy, most of the remaining 70 percent being treated, often in stages, by ligation of the arteries. Considerable difference of opinion exists as to the degree of improvement which follows ligation. There is, however, enough direct evidence of histological changes in the gland to justify retention of this method in the armamentarium of the surgeon who has to treat thyrotoxicosis.