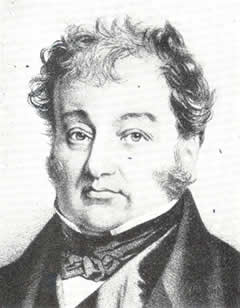 An invaluable adjunct in the pre-operative preparation of patients with Graves’ Disease, Lugol’s iodine markedly reduces both the size and vascularity of the gland – however that was not the intent of its creator. Jean Guillaume Auguste Lugol was born in 1786 at Montauban, France. He graduated MD Paris in 1812 and seven years later was appointed to the staff of the Hopital St Louis. His great interest in life was scrofula, a collective term applied to tuberculous lymph nodes, tuberculous bones , and tuberculous joints before it was known that these conditions were caused by the same organism that caused pulmonary tuberculosis. Scrofula was known for years as the “King’s Evil” because it was believed that anointed monarchs could cure sufferers from the malady by touching them. It is said that between 1662 and 1682, Charles II “touched” over 92,000 sufferers from the King’s Evil. Lugol’s first “Memoir on the Use of Iodine in Scrofulous Diseases” was read before the Royal Academy of Sciences of Paris in 1829. His treatment comprised fresh air, exercise, cold bathing and drugs. Above all, he placed his faith in iodine therapy. His aqueous solution of iodine (liquor iodide aquos) for oral administration consists of 5 per cent of iodine, 10 per cent of potassium iodide, and distilled water to make 100. The first recorded use of Lugol’s iodine in the management of Graves’ disease was by HS Plummer from the Mayo Clinic in 1924, where its routine use transformed surgery for Graves’ Disease into a much safer procedure with an acceptably low morbidity and mortality. Although less used nowadays, good data are available to show an effect with oral administration of Lugol’s iodine in causing a significant decrease in blood flow through the superior thyroid artery, as well as a significant reduction in thyroid hormone secretion.