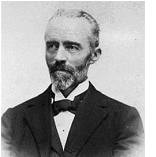 The function of the thyroid glands was discovered as a direct result of the effects of total thyroidectomy in man. This soon resulted in a reappraisal of the surgical approach to goitre and the preparation of an active thyroid extract for the relief of hypothyroidism. Theodore Kocher, appointed Professor of Surgery in Berne in 1872, essentially perfected the operation of thyroidectomy and was the first surgeon to be awarded the Nobel Prize. He reported his first series of thirteen strumectomies which included two total extirpations. One was Marie Bischel, aged 11, who underwent operation in 1874 and whose behaviour changed with the surgery. While previously a “spirited and joyous creature” she became “peevish and dull” and was reluctant to work. Before the operation she and her younger sister had been taken for twins. In the ensuing nine years, the sister had blossomed into a very pretty young woman, while Marie had remained small and had an ugly, almost idiotic, appearance. He immediately recalled all his patients and found similar changes in all who had had total extirpation. He reported this to the Congress of German Surgeons in 1883, and suggested that the condition was caused by injury to the trachea which resulted in chronic asphyxia and, as a result ceased to perform total thyroidectomy from that time on. It was not until 1888 that a committee, appointed by the Clinical Society of London, concurred that the effects of total thyroidectomy were due to arrest of thyroid function. After attempts at transplantation and subcutaneous injection of thyroid extract by George Murray, Edward Fox of Plymouth introduced oral thyroxine therapy which proved effective. Recommended was “half a sheep’s thyroid, lightly fried and taken with currant jelly once a week”