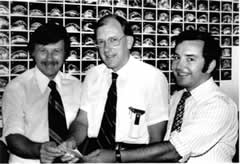 Thyroid and parathyroid ultrasound are now part of routine clinical practice, with endocrine surgeons and endocrinologists around the world being encouraged to incorporate clinician-performed ultrasound (CPU) as an extension of clinical examination. What is not commonly appreciated is that thyroid and parathyroid ultrasound, and the technological developments that led to their introduction into clinical practice, were actually an Australian achievement. Ultrasound was originally a modality developed by the US military to detect metal flaws. It was released for general use after World War 2, and in 1951 the technology was first used to describe the acoustic characteristics of breast tumours. During the 1960’s research into breast ultrasound continued in Australia and in 1966 the first ultrasonic breast scanner in the world was installed at Royal North Shore Hospital in Sydney under Tom Reeve’s clinical supervision. It was a bistable machine capable of imaging in linear, sector, and compound scanning modes. The technological developments that enabled this scanner were the development of grey scale imaging techniques by George Kossoff and Jack Jellins at the Commonwealth Acoustic Laboratories in Chatswood, Sydney. The combination of grey scale imaging and focused array techniques enabled grey scale ultrasonography to be applied to all soft tissue lesions. ASUM (Australian Society for Ultrasound in Medicine) was set up in 1970, another world first. In 1974 the breast scanner was then modified and applied to the thyroid, parathyroid and testis. The increasing experience of this group with the clinical application of small parts ultrasound led to the publication in the 1978 of sentinel publications on small parts ultrasound of breast, testicle, thyroid, and parathyroid. The thyroid (1) and parathyroid (2) publications noted below were among the first in the world to utilise the technology, and set the scene for the use ultrasound in endocrine practice for decades to follow.