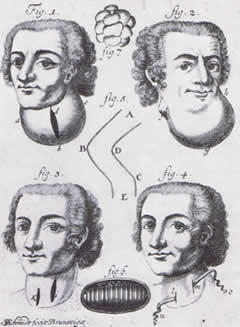 The German anatomist and surgeon, Lorenz Heister was born in Frankfurt in 1683 and appointed to the Chair in Surgery and Anatomy in Altdor. In his textbook “Chirurgie” we find some of the earliest descriptions of various medical and surgical approaches for the management of goitre. “In the case of a recent goitre the patient must be given a good diet and suitable sudorific and purgative drugs. It is said to be a beneficial practice if people who are getting a goitre wear a necklet of lead right at the beginning which, while not always successful, at least prevents the goitre from growing any bigger. Many recommend that incipient goitres should be stroked with the hand of a dead man, preferably one that has died of consumption. However in the case of old goitres which cannot be dispersed by drugs but nevertheless remain mobile, it is possible in some cases to remove them completely. Mobile goitres can be removed in three ways: