August 2003 Newsletter: The tubercle of Zuckerkandl 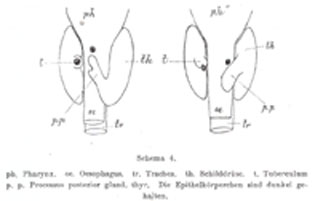 The tubercle of Zuckerkandl is a distinct anatomical entity that was first described by Emil Zuckerkandl in 1902. The description, and the clinical significance of the tubercle, was lost to endocrine surgeons until the last decade when the tubercle was “rediscovered” by a number of authors. Thyroid development involves the midline descent of thyroid tissue from the foramen caecum to the level of the larynx along the thyroglossal tract, at which stage the left and right lobes develop. What is not as well appreciated is that there is, in addition, a lateral thyroid component arising from the 4th branchial cleft and ultimobranchial body which fuses with the median component to form the tubercle of Zuckerkandl. This fusion is not only the source of the thyroid’s C-cells, but is also essential in the process of follicular development. Emil Zuckerkandl studied medicine at the University of Vienna in 1867 and distinguished himself such that eventually, following the death of Langer in 1888, he assumed the Chair in Anatomy at Vienna. He was noted for his sharp observational powers and critical mind making significant contributions to normal and pathological anatomy. He is also one of the very few medical scientists who is remembered as much for his wife, Bertha Zuckerkandl-Szeps, one of the most remarkable personalities of intellectual Jewish society in Vienna during the last decades of the Austro-Hungarian empire. Their house became the meeting point for the avant garde in arts and science, including the sculptor Auguste Rodin and the composer Gustav Mahler. Zuckerkandl’s name is associated with seven eponymous anatomical/surgical entities: