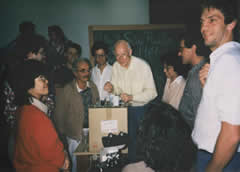 Thyroid fine needle biopsy is now accepted as the definitive diagnostic procedure in the investigation of thyroid nodules. It was developed at the Karolinska Hospital in Stockholm, Sweden, and many decades passed before the technique was accepted worldwide. Fine needle biopsy (FNB) is more than 100 years old. In 1904 Greig and Gray reported that trypanosomal organisms could be detected in needle aspiration material from lymph nodes in a patient with sleeping sickness. Thyroid fine needle biopsy however had its origins at the Karolinska Hospital in Sweden. In the late 1940s Dr Sixten Franzén, then a young doctor with special interest in the morphology of bone marrow smears, was recruited to the oncology clinic at Karolinska. Dr Franzén started to make aspiration biopsies stained with Giemsa from various tumours and his diagnoses were, already at this time, used in the clinical management of many patients. In 1967 a Fine Needle Biopsy Clinic was opened at the Karolinska Hospital. Drs Zajicek, Löwhagen and Esposti joined the Clinic and, in its heyday, more than 10.000 patients were examined, aspirated and diagnosed each year. The clinical impact of this activity had a dramatic effect, with the number of open thyroid biopsies being reduced substantially. Needless to say, at this time there were many opponents of the use of fine needle cytology as definite diagnostic method. Dr Löwhagen was particularly enthusiastic about teaching the techniques, and several hundred foreign doctors were introduced to fine needle cytology over the years. Although it took several decades for the technique to be accepted worldwide, thyroid fine needle biopsy, as pioneered at the Karolinska Institute, has led to a significant reduction in the number of patients requiring surgery for thyroid nodules.