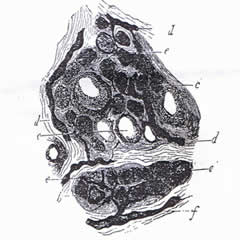 It is interesting to review historical attitudes towards the presumed function of endocrine organs prior to any real understanding of endocrine physiology or pathology. Much was supposition, based on either anatomical relationships or chemical analysis. The following is an extract from an early (1880) edition of Gray’s Anatomy in which the writer speculates on the possible function of the thyroid gland. “The thyroid gland bears much resemblance in structure to other glandular organs, and is usually classified together with the thymus, suprarenal capsules, and spleen, under the heading ductless glands, since it has no excretory duct……… Its function is unknown, but, from its situation in connection with the trachea and larynx, the thyroid body is usually described together with those organs although it takes no direct part in the respiration. Nonetheless it is situated at the upper part of the trachea, and consists of two lateral lobes, placed one on either side of that tube, and connected together by a narrow transverse portion, the isthmus. …….. It occasionally becomes enormously hypertrophied constituting the disease bronchocoele ………… The thyroid consists of numerous closed vesicles which contain a yellowish fluid in which are found floating numerous “dotted corpuscles” and cells. The fluid coagulates by heat or alcohol but preserves its transparency. Early in life commences a colloid transformation by which the cells of the epithelium are separated from the lining of the vesicle, and their contents are converted into colloid, or gluey matter. It is the excessive increase of this colloid which constitutes the essential phenomenon in bronchocoele, but its occurrence to some extent can be regarded as normal …… The thyroid gland consists of albumen, traces of gelatine, stearine, oleine, extractive matter, alkaline and earthy salts, and water. The salts are chloride of sodium, alkaline sulphates, phosphate of potash, lime, magnesia, and a trace of oxide of iron.”