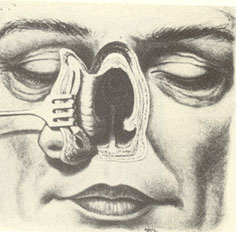 The first pituitary operation was performed by Victor Horsley, of London, in 1889. Horsley was a general surgeon who pioneered intracranial operations. By 1913 the results of his first four craniotomies were published: all had visual field defects and headaches. One died after six hours, and the other three had serious complications, however they survived between nine months and eight years. At this stage neurosurgeons began to devise extracranial approaches to the pituitary. There were three main problems: to discover the best route to the pituitary; to avoid serious infection; and to prevent disfigurement after removal of facial and nasal bones. Herman Schoffler, of Innsbruck, performed the first extracranial procedure on a patient with a large tumour by mobilising the nose on a pedicle, opening the entire nasal cavity, and removing the tumour piecemeal. The patient lost his headaches but did not recover his sight, living 10 weeks. Eiselberg, of Vienna, introduced a modification to reduce facial deformity, however infection remained a major problem, either causing death from meningitis, or a persistent offensive nasal discharge. A number of major improvements followed with Theodore Kocher, of Berne, introducing submucosal resection of the nasal septum and Albert Halstead, of Chicago, devising a gingival incision behind the upper lip. Harvey Cushing, of Baltimore, undertook his first transphenoidal operation in 1909 using a modification of Schloffer’s method. The patient, an acromegalic, improved greatly and lived for 21 years after partial hypophysectomy. The next year, by combining the two main modifications – an oral incision and submucosal resection of the septum – Cushing established an operation that he and others used successfully virtually unchanged for 50 years. By 1916 Cushing had done 106 operations with only 8 operative deaths (7.5%) and had established transphenoidal hypophysectomy as a relatively safe and effective procedure.