What are the adrenal glands? 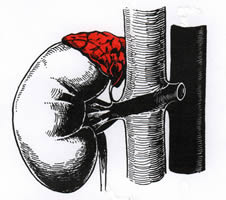 The adrenal glands are yellow triangular shaped glands at the top of your kidneys. They are normally about 2 to 3 cm in size. They produce a number of hormones such as cortisol, aldosterone, adrenaline and noradrenaline. These hormones are responsible for a number of functions including control of blood pressure and dealing with your body’s response to stress. The adrenal gland also manufactures some of the sex hormones.

What are the indications for adrenal surgery?

Adrenal surgery (adrenalectomy) may be recommended where:

How is adrenal surgery usually done?

Adrenalectomy can be done as an open procedure or as a laparoscopic (keyhole) procedure. 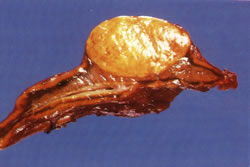 This is usually performed if the adrenal tumour is very large or is likely to be a cancer. Open adrenalectomy is generally performed under a general anaesthetic. Open operations may be performed through the back, the flank, or the abdomen. In all cases a skin incision is made and the underlying muscles divided. The adrenal gland is located and removed with great care being taken not to injure nearby structures such as the major veins in the abdomen. The muscles are then put together again and the skin incision is closed with sutures that will either absorb or be removed soon after your operation.

This can be performed where the tumour is smaller and unlikely to be a cancer. It is also performed under general anaesthetic. Laparoscopic procedures use small telescopes and instruments to remove the adrenal gland through a number of small incisions. The adrenal gland is located and removed with video guidance and, as with open surgery, with great care being taken not to injure nearby structures such as the major veins in the abdomen. Typically, patients having laparoscopic procedures have less pain and a more rapid recovery.

What are the risks and complications of adrenal surgery?

Most surgery nowadays is safe however any operation has general risks including reactions to the anaesthetic, chest infections, blood clots, heart and circulation problems, and wound infection. In addition there are specific risks associated with adrenal surgery as follows: